The news from the "Religion of Peace" has been so horrific over the last months, I've found it impossible to keep track of the links, much less to have any heart about it, nor do my other work and monitor that depressing subject simultaneously.  But following the mass-killings of more than 500 Nigerian Christians by machete-wielding Muhammed followers last month (screaming "Allahu Akbar" as they butchered mostly women and little children without mercy), and recent bombings in Moscow, which followed late last years "underwear bomber", the Islam-insane Ft. Hood psychiatrist, the Massacre at Mumbai and other similar unprovoked atrocities (other than the
"provocation" of being an infidel, or to have dared stand up against Islamic agendas), it seemed a good time to once again re-familiarize my network with what the mainstream news is rigorously censoring from their reportage.  Or, trying to rationalize.   Rather than taking the approach of prior years, I'll simply give you the primary websites where this issue is tracked and discussed, each of which has multiple informative articles and documentary weblinks.
This is not enjoyable material, but will give you a good cardio-vascular work-out as you learn what's being concealed, and certainly necessary given how the current political and academic leadership in both Europe and the Americas seem Hell-bent to bring Islamic Sharia-Law dictatorship right into our midst, while simultaneously empowering Islamic dictators towards new territorial ambitions.  Educate yourself and respond accordingly, or become a victim of it.   A daily or weekly survey of the articles appearing at these websites will give you a more in-depth and fact-based education on what is going on in the world and at home, than the combined trivia and apologism regularly spooned up by the NYT, CCN, BBC, CBS, NBC, Etc.  Which is why those "news" sources continue in sharp decline.  People want the truth and facts, not pablum designed to advance socialist and Islamo-fascist agendas.
And once more, if you don't yet know the relevance of this to the issues of Wilhelm Reich's discovery of human armoring and social violence, then please get a copy of my primary work, written well before the events of 9-11-2001:

Saharasia: The 4000 BC Origins of Child-Abuse, Sex-Repression, Warfare and Social Violence, in the Deserts of the Old World. 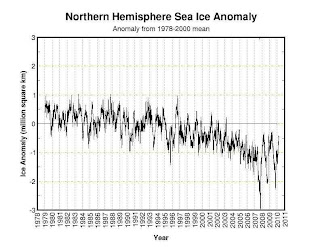 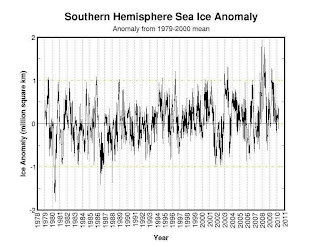 Classify these under "Half-Way Truth Telling to Save Face from Prior Lying".
UN body to look at meat and climate link
http://news.bbc.co.uk/2/hi/science/nature/8583308.stm
This one is great.  The BBC previously took their lead from pro-vegetarian writers whose claims were then jazzed up in public by an aging rock-star, "Sir" Paul.
"Goddess" Glacier Melting in War-Torn Kashmir
http://news.nationalgeographic.com/news/2010/03/100324-himalaya-glacier-melt-water/
Here, the small details are buried in the story, notably that "...in 2009 scientists discovered major flaws with this prediction. A report published in November 2009 claimed the glaciers in the Himalayas are not receding and some have even expanded."   So naturally to keep the hysteria going, they pick out one shrinking glacier for "an example", in spite of the "major flaws", to formulate another face-saving lie.  They could just as easily have picked out a few of the expanding glaciers to make a headline "Glaciers Expanding in War-Torn Kashmir".  But of course, that would go against the politically-correct agendas.
Wind contributing to Arctic sea ice loss, study finds http://www.guardian.co.uk/environment/2010/mar/22/wind-sea-ice-loss-arctic
Classify this one under "oops".  Well, who could have imagined that winds might push the ice cover away from one coast, and crunch it into another, thereby creating a false-impression of overall ice-loss.  Well, any decent climatologist, that's who.  But the MSM -- especially left-wing journalists out to make Socialism-by-any-excuse -- will only consult with the indecent climatologists, as at Hadley-CRU.
As to the real ice-cap situation today, a quick look at the Cryosphere Today website (maintained by the Polar Research Group at the Univ. of Illinois Dept. of Atmospheric Sciences, using NOAA satellite data) shows a clear gradual decline in Northern Hemisphere Arctic sea ice area over the last 30 years, with the minima around 2007-2008, and slight recovery since.  Southern Hemisphere sea ice area over the same period, however, shows a generalized dramatic increase.  It was at its lowest point around 1980, with a slow increase in ice-area since around 1990, and dramatically increasing sea ice since 2006-2007, with a major peak in 2008-2009.
http://arctic.atmos.uiuc.edu/cryosphere/index.noshade.html
This agrees with all other data, of a turn away from global warming trends over the last decade, towards cooler conditions globally.
I will try to post two graphics showing these sea-ice trends into this email, but if they do not reproduce, go to the above weblink to get them.
J.D. 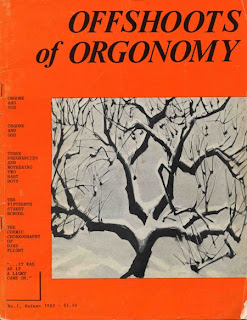 The #1 issue of Offshoots of Orgonomy has just been posted to our website, in a better-quality PDF file than was available previously.
This publication was produced by the late Lois Wyvell, Wilhelm Reich's personal secretary, who passed away in 2005.  The publication sold only a limited number of copies, and the remaining inventory sat in boxes in basement location for several years, before being rescued, cleaned up and offered again to the public.  A total of 15 issues were published, filled with interesting articles by both professionals and laypeople, students of orgonomy and "old hands" familiar with Reich's work over decades.
The first two issues, #1 and #2, sold out some time back, so both of those are now available for a free download at Natural Energy Works, the bookstore for OBRL. http://www.naturalenergyworks.net
Go to the above web-link, and scan down on the left-hand side list for Offshoots of Orgonomy.  Click on that link and it will take you to the Offshoots webpage, which lists the various issues along with their contents.  In addition to the free download, you can also purchase the remaining in-print back-issues, which are priced economically.
Enjoy!   J.D. 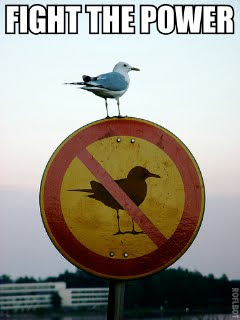 Lecture in Greece on the Wilhelm Reich Museum

Courtesy Announcement
Lecure by Kevin Hinchey of the
Wilhelm Reich Museum (Rangely, Maine)
in Greece, on 13-14 March 2009
In English with Greek Translation 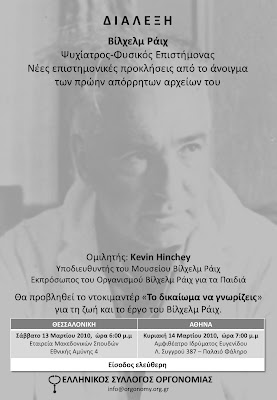 This is a case you should know about.  Absolutely outrageous.
http://www.naturalnews.com/028306_Greg_Caton_FDA.html
Once again, my article on the FDA, here:
http://www.orgonelab.org/fda.htm
So much for the new "liberal" (read: Hard Left) government now in power.
Mafia Hooligans in Government.
This will worsen with the new "health care" laws.

Here's a couple of interesting articles on the American Psychiatric Association's new Diagnostic and Statistical Manual of disorders:
Why Psychiatry Needs Therapy
A manual's draft reflects how diagnoses have grown foggier, drugs more ineffective
http://online.wsj.com/article/SB10001424052748704188104575083700227601116.html?mod=WSJ_hpp_sections_lifestyle
Replacing Moral Flaws With 'Disorders'
http://www.kitsapsun.com/news/2010/feb/28/george-will-replacing-moral-flaws-with-disorders/
This is a big problem, which ranges into more purely biological issues, such as claimed infectious HIV, swine-flu pandemics, bird-flu, Hep-C, etc.  New "diseases" and "disorders" snatched out of thin air, with only the most tenuous evidence to support them.  And soon enough, to be dictated to everyone by Government Authority.
I'm reminded that the third leading cause of death in the USA is "iatrogenic" -- death by doctor, from wrong medications, bad medications, hospital infections, unnecessary surgery, botched surgery, and so on.  Neither this, nor any kind of natural health concern, has received five-seconds of discussion in the current "Health Care" debate, even though directly addressing it would lead to a dramatic reduction in costs for health-care all by itself.
Doctors Are The Third Leading Cause of Death in the US, Killing 225,000 People Every Year
http://articles.mercola.com/sites/articles/archive/2000/07/30/doctors-death-part-one.aspx
Just imagine, if one-third of all hospital procedures, the deadly ones, were simply eliminated?  Costs would decline dramatically.
Interesting that this article by Dr. Mercola -- like myself, a critic of mainstream medicine -- draws primarily from an article in the Journal of the American Medical Association, suggesting even that very mainstream organization is concerned with the increasingly out-of-control situation.
Which makes us wonder, what kind of pills the doctors are popping themselves.
J.D.