New Confirmations on Saharasia
A few new findings from mainstream science, confirming different aspects of my Saharasia research.
Two-hundred-year drought doomed Indus Valley Civilization
http://www.nature.com/news/two-hundred-year-drought-doomed-indus-valley-civilization-1.14800
The ruins of the ancient city of Harappa, now in Pakistan, one of the major centres of a civilization that disappeared probably because of climatic upheaval.
Classical views indicate both severe enduring drought, and invasions of warrior-nomads from Central Asia, led to the demise of Harappa.
Scots Are Descendants Of A Long - Lost Race From Sahara -
DNA Reveals Startling Secrets Of The Past
http://www.messagetoeagle.com/scotlandlostrace.php#.UyCxe0YZxTQ
Many of the warrior tribes which migrated or invaded into the British Isles originally came from the desiccating lands of North Africa, the Middle East or Central Asia, after having firstly settled and dominating across Europe.  The Scots, Celts, Angles and Saxons all came into Britain ultimately from Saharasia directions.  Similar origins are known for the Normans and Germanic tribes, arriving in continental Europe from out of adjacent desert lands, as it was also with the Etruscans and Dorian Greeks in the centuries beforehand.
How climate change helped Genghis Khan: Scientists believe a sudden period of warmer weather allowed the Mongols to invade with such success
http://www.independent.co.uk/news/science/how-climate-change-helped-genghis-khan-scientists-believe-a-sudden-period-of-warmer-weather-allowed-the-mongols-to-invade-with-such-success-9182580.html
A long period of warm, wet weather spanning several decades helped one of history's most fearsome tyrants to conquer most of Asia and Eastern Europe and form the largest continuous land empire the world has known, a study has found.
This principle of changes in moisture affecting the settled versus unsettled condition of the Central Asian warrior nomads was firstly discovered by the geographer Ellsworth Huntington, who wrote several books on the subject, "The Pulse of Asia", and "Palestine and its Transformation" based upon travels through those regions (on horse or camel) in the early 1900s.  His chronology for wet versus dry periods was not so exacting as what is determined today by more objective measures, but the principles of vast climate changes affecting human societies for better or worse were solidly documented.  (Note, all of this goes against the modern claims of ""CO2 driven global warming" as he basically identified massive climate changes from pre-industrial times, just as I did in my independent analyses within the Saharasia book.)
As I wrote in a separate essay in 2010, "An Appeal to Caution on 'Desert Greening'", from various lines of evidence it appears certain that greening the world's big deserts by cloudbusting, an idea which I once entertained, will not lead to any immediate betterment of human societies or relations, nor create any "peaceful co-existence" between the desert warrior tribes (today, Islamic warrior tribes), and their neighbors.  Instead, desert greening merely increases food supplies and human energy.  If a society is peaceful and unarmored, this greater energy leads them towards increases in core-impulse living -- namely towards greater development of love, work, and knowledge, as Wilhelm Reich so eloquently put it.  For heavily armored people, already quite violent but lacking in resources to export their violence to distant lands (as was the case with the Islamic world during the periods between its major conquest-expansions), such an increase in human energy merely engages secondary-layer impulses, of anti-love, anti-work, and anti-knowledge, with increased outbursts of violence and conquest warfare.  The new evidence in the article above indicates this is precisely what happened with Genghis Khan, a mass-murdering Central Asian war lord who was correctly compared to being the "atom bomb" of his day.  His hordes of warrior nomads would surround a city, lay siege and reduce it to rubble, stealing all of value and burning everything else to the ground, while killing all inhabitants save for slaves and young women for rape.
J.D. 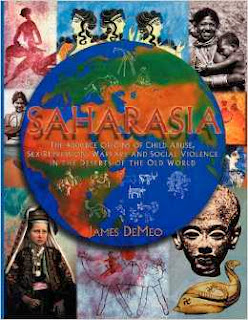 Saharasia: The 4000 BCE Origins of Child Abuse, Sex-Repression, Warfare and Social Violence, In the Deserts of the Old World, by James DeMeo, PhD
http://www.amazon.com/Saharasia-Origins-Sex-Repression-Warfare-Violence/dp/0980231647