"your work is absolutely phenomenal. You've absolutely obliterated mainstream physics (and ultimately so much of science generally) for the past 130 years with incredibly succinct detail."  G.P., Engineer, USA
"I have to say thanks to you, because after reading your work I decided to read the original work of Dayton Miller and all seminal works of Michelson-Morley...if only the modern physicists were taking the time to read the original works of the past, they would understand how many lies are written in modern books! Saying nothing about wikipedia!" Z.S., Nuclear Physics, Italy
New Book by James DeMeo, PhD, Now Available:
The Dynamic Ether of Cosmic Space:
Correcting a Major Error in Modern Science 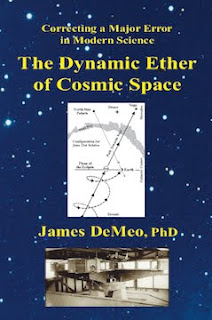 Available for
USA and International Purchase,
from Natural Energy Works
http://www.naturalenergyworks.net
The Cosmic Ether Changes Everything!
The historical ether-drift experiments of Michelson-Morley, Dayton Miller and others yielded positive results for an ether wind and light-speed variations of 5 to 18 kilometers per second. Academic bias and erasure has misrepresented these facts for over 120 years, to the point that few dare question today. Scientist James DeMeo reviews the original documents and archives, exposing the facts which demolish nearly all of the post-ether astrophysical theories, including Einstein's relativity, the "big bang", "black holes" and quantum magic. Cosmic ether exists and moves in a creative gravitational spiral vortex, as the long-sought prime mover and life-energy. A must-read item for the professional scientist, educated layperson and student, in ordinary language with minimal maths.

Dr. DeMeo's Dynamic Ether of Cosmic Space is another scholarly masterpiece, doing for Astrophysics what his Saharasia did for Ancient History, Climatology and Ethnography. Astrophysical mysticism, references to "other worldly" and unseen mechanisms comes in for pointed criticism, even while empirical Astronomy and Space Science Engineering is preserved and celebrated. The conflict between the feet-on-the-ground experimenters versus the "head in the clouds" theoreticians is exposed and its counter-productive consequences laid bare.

"There is no 'vacuum'". (W.R.)
Space is not "empty" and the universe is not "dead". (J.D.)
Author DeMeo goes well beyond merely recounting the historical record and suppression of positive evidence favoring the cosmic ether. He also presents new evidence for a cosmic life-energy, functionally identical to cosmic ether, for the open-minded to consider, along with the Implications and Consequences of thse findings to mainstream astrophysics and astronomy. For example:

Part I, Cosmic Ether as Theory and Experimentally Confirmed Fact, includes 8 different chapters which firstly introduces the concept of ether, then details the late 18th and 19th Century experimenters who made its detection by increasingly sophisticated instruments, some of which are still in use today. The interferometer experiments of Michelson-Morley and Dayton Miller are introduced, exposing facts by direct quotations from their publications in mainstream science journals, of multiple positive detections of the cosmic ether. In most every case, from the early to the more recent ether-drift experiments, the cosmic axis of Earth's motion in space, in right ascension and declination, have been determined. Furthermore, these determinations are in approximate agreement with the modern determinations of the Sun and solar system's motion through the galaxy, towards the star Vega, and ultimately towards the center of our Milky Way Galaxy. These experiments provide evidence violating a major starting assumption for Einstein's theory of relativity, proving that light speed is variable, depending upon direction in the cosmos.
Part II, The Empire Strikes Back: Erasure, Mystification and Falsification of History, covers the rise of Albert Einstein's theory of relativity, and how he and his supporters managed to ignore and obscure the positive outcomes of the various ether-drift experiments. It also details the unethical "hatchet-job" against Dayton Miller's exceptional ether research, years after his death, by Einstein sycophant Robert Shankland, whose paper is still cited today as "definitive proof against Miller's ether-drift findings". That, it most certainly was not! Einstein's originally friendly, but later dismissive treatment of Miller is detailed, including his many statements in private letters wherein he expressed deep concern that, if Miller's work was correct, then his theory of relativity would "collapse like a house of cards".

Part III, Into New Territory: Additional Evidence for a Material, Motional and Dynamic Ether, Dr. DeMeo overviews the findings from different disciplines, for a biologically-active and water-reactive cosmic life-energy. Notably, the findings of Wilhelm Reich, Giorgio Piccardi and Frank Brown are discussed. These newer findings are very agreeable to those of the ether-drift scientists, who postulated a material entrained ether that could affect, and be affected by matter. Additional direct evidence for the cosmic ether and ether-wind, by other names are discussed, showing they mostly have cosmic motions nearly identical to the older ether-drift findings: the interstellar wind, dark matter wind, cosmic ray wind, neutrino wind, and so forth. Seventeen independently determined, yet similar cosmic vectors of motion, from the ether-drift experiments, as well as from modern Astronomy, Biology and Chemistry are identified by Dr. DeMeo, as summarized on the rear-cover graphic, shown below.

The implications for these collective findings are staggering for modern science, indicating how modern metaphysical and other-worldly astrophysical theory has diverged from Empirical Astronomy, to embrace multiple mystical theories in an increasingly complicated manner. A return to the experimentally-detected cosmic ether, in its real-world dynamic and spiral-form motion, provides a singular explanation for multiple cosmic phenomena, where currently there are dozens. All the post-ether astrophysical theories are shown to be mired in mysticism and unproven assumptions, even while empirical astronomy and space science engineering proceeds with new discovery nearly every day.

The Dynamic Ether of Cosmic Space covers a broad landscape of 20th and 21st-Century science, but is developed for the non-specialist, the educated layperson and student. Most scientific professionals will also find it refreshing, if not challenging, as most of them were never taught about the factual ether-drift discoveries in their own student textbooks!

A dynamic cosmic energy in space, merged with related discoveries in biology, chemistry and physics, changes everything, indeed! 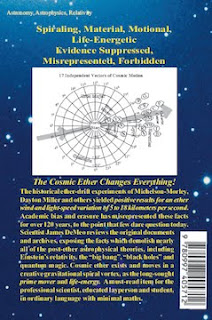 Rear Cover of The Dynamic Ether of Cosmic Space, identifying seventeen independent vectors of Earth's cosmic motion in space, including the vectors for cosmic ether drift.
Also of interest, our other existing book offerings:
http://www.naturalenergyworks.net
(Books on the Left Column, Meters and Products on the Right)
NOTE: All past OBRL Notices and Newsletters are found on the OBRL Wordpress Blog, which archives them. https://obrlnews.wordpress.com/
ALSO:
Please Support Orgonomic Science Research at the DeMeo Laboratory
Orgone Biophysical Research Lab - OBRL
Consider making a donation to OBRL, Dr. DeMeo's institute, which is a non-profit scientific research and educational foundation, approved by the IRS for tax deductions. Donations and book sales is how OBRL research and educational programs are supported. To donate right away, please go here:
http://www.orgonelab.org/donations.htm
You can select for a single donation, or a recurring donation of any amount, as you prefer, using any credit card (via the PayPal system). Written checks can also be sent to "OBRL" at PO Box 1148, Ashland, Oregon 97520 USA.
Thanks for your interest and support.
And Please Share This Announcement
with your own network of contacts. Thanks!