UPDATE: Weekend Seminar on Wilhelm Reich and Orgonomy
Ashland, Oregon, USA
Plenty of seats available.  Will be around 20 persons so far, a comfortable intimate group.

http://www.orgonelab.org/events.htm
Primary Seminar to be held in a classroom at
Southern Oregon University
(Exact address, building and room location to be announced later)
near to downtown Ashland, Oregon, USA
29-30 August 2015, Saturday and Sunday
9:00 AM to 5:30 PM
Optional Events at the nearby OBRL high-altitude facility
* Friday Evening Social Gathering
* Saturday & Sunday Night Viewing of the
OBRL Orgone Accumulator Darkroom
* Optional Monday Field Trip to nearby
Crater Lake National Park, with
the bluest water in the world!

For more details, click this weblink:
http://www.orgonelab.org/events.htm
Thanks for your interest,
and we hope to see you there.
PLEASE REGISTER SOON
Late arrivals risk being turned away due to limits on attendance.
You can also get our announcements and other more frequent postings by joining the Natural Energy Works & Orgone Biophysical Research Lab (OBRL) Bulletin, hosted at Yahoo Groups:
obrl-quarterly-subscribe@yahoogroups.com
Our announcements and postings are also mirror-posted to the OBRL Blog at Wordpress:
https://obrlnews.wordpress.com
Titles and weblinks for all OBRL announcements and postings are also tweeted out by Twitter:
https://twitter.com/DrJamesDeMeo
Please share this email with your own social-media, as we rely upon word-of-mouth to let others know about our offerings.

"Pulse of the Planet" Back Issue No.3 Available Once Again

The OBRL Journal Pulse of the Planet
Back Issue No.3 from 1991, Available Once Again
* Pulse of the Planet No.3: On Peaceful Versus Violent Societies, Nuclear Accidents, and Wilhelm Reich's Orgone Energy for Healing Land and Life 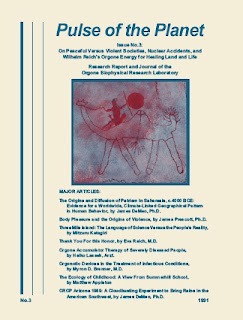 For North American purchases:
http://www.amazon.com/Pulse-Planet-No-3-Societies-Accidents/dp/0989139069
http://www.orgonelab.org/cart/xpulse.htm   (scroll down)
For European or other International
http://www.amazon.co.uk/Pulse-Planet-No-3-Societies-Accidents/dp/0989139069
First published in 1991, Pulse of the Planet No.3 was part of a series of occasional reports by the Orgone Biophysical Research Laboratory (OBRL), edited by James DeMeo, PhD. This particular issue continued to present new materials documenting long-distance geophysical, atmospheric and biological reactions to the on-going program of underground nuclear testing of that period. It also provided additional information on Wilhelm Reich's orgone energy discovery, including papers which discussed the use of the orgone energy accumulator for health and healing. An experimental field test of Reich's cloudbusting method to increase rains over Arizona in 1989, was also reported. Additional papers presented a concise discussion on cross-cultural factors which identify peaceful versus violent societies, including DeMeo's work on Saharasia. Plus, a discussion on Summerhill School in Suffolk England was also presented.
This third issue of Pulse contains the following materials:
* By James DeMeo: "The Origins and Diffusion of Patrism in Saharasia, c.4000 BCE: Evidence for a Worldwide, Climate-Linked Geographical Pattern in Human Behavior", "OROP Arizona 1989: A Cloudbusting Experiment to Bring Rains in the Desert Southwest", and "Interview with James DeMeo" conducted by Matthew Ryan.
* By James Prescott: "Body Pleasure and the Origins of Violence".
* By Mitzuru Katagiri: "Three Mile Island: The Language of Science versus the People's Reality".
* By Heiko Lassek: "Orgone Accumulator Therapy of Severely Diseased People".
* By Myron D. Brenner: "Orgonotic Devices in the Treatment of Infectious Conditions".
* By Matthew Appleton: "The Ecology of Childhood: A View from Summerhill School".
* By Eva Reich: "Thank You For This Honor".
* Conference Reports & Book Reviews.
* Research Progress Report.
* Emotional Plague Report.
* Science, Sex-Economic & Environmental Notes.
* Nuclear Hazards.
* Orgonomic Research Review.
* Calendar of Forthcoming Events.
* Letters to the Editor.
This was the third and last issue of Pulse of the Planet under that specific title, though it continued as an "Occasional Report" from the OBRL under separate book titles. The original edition of Pulse No.3 went out of print years ago, but is now made available once again given the importance of the materials, both for the issues they raise, as well as for the history of orgonomy in the period after Reich's death.
++++++++
"In a time of universal deceit, telling the truth is a revolutionary act."
- George Orwell
Weekend Seminar on:
Wilhelm Reich's Original Orgonomic Discoveries:
Foundations and Science
Emphasizing New Research Supporting Reich
http://www.orgonelab.org/events.htm

"Pulse of the Planet" Back Issue No.2 Available Once Again 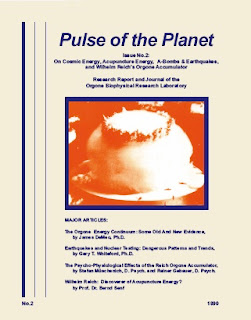 For North American purchases:
http://www.amazon.com/Pulse-Planet-No-2-Acupuncture--Bombs/dp/0989139050
http://www.orgonelab.org/cart/xpulse.htm   (scroll down)
For European or other International
http://www.amazon.co.uk/Pulse-Planet-No-2-Acupuncture--Bombs/dp/0989139050
http://www.bookdepository.com/Pulse-Planet-No-2/9780989139052
First published in 1990, Pulse of the Planet No.2 continued with an ambitious program for global monitoring of geophysical events potentially caused by underground atomic bomb testing, as well as for atmospheric and biological anomalies and extremes. Weekly world maps were prepared identifying the times and locations of major droughts, floods, earthquakes, hurricanes, air pollution crises and other violent weather, in efforts to comprehend the totality of bioenergetic coherence in nature. Articles detailed a new double-blind study of Wilhelm Reich's orgone energy accumulator, undertaken at a German university, plus new findings on orgone-acupuncture. An additional article reviewed old and new evidence on the subject of the cosmic ether of space, and related findings in biology, chemistry and astrophysics. This second issue of Pulse contains the following items:
* By James DeMeo: "The Orgone Energy Continuum: Some Old and New Evidence" * By Gary T. Whiteford: "Earthquakes and Nuclear Testing: Dangerous Patterns and Trends"
* By Stefan Müschenich and Rainer Gebauer: "The Psycho-Physiological Effects of the Reich Orgone Accumulator"
* By Bernd Senf: "Wilhelm Reich: Discoverer of Acupuncture Energy?"
* Conference Reports
* Environmental Notes
* Science Notes
* Health Notes
* Sex-Economic Notes
* Emotional Plague Notes
* Climate Features and Unusual Phenomena, Weekly World Maps, covering 6 months.
* Planetary Clock
* Research Progress Report
* Cosmic Orgone Engineering Report
* Orgonomic Research and Publications Review
* Calendar of Events
* Orgonomic Observations
* Letters to the Editor.
Pulse of the Planet journal continued for additional years, presenting many articles on these and similar subjects. The original edition of Pulse No.2 went out of print years ago, but is now made available once again given the importance of the materials, both for the issues they raise, as well as for historical value.
++++++++
"In a time of universal deceit, telling the truth is a revolutionary act."
- George Orwell
Weekend Seminar on:
Wilhelm Reich's Original Orgonomic Discoveries:
Foundations and Science
Emphasizing New Research Supporting Reich
http://www.orgonelab.org/events.htm 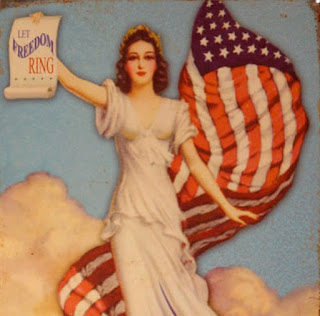 Americans have historically enjoyed more freedoms than most other nations on the planet, especially regarding freedom of speech and of the press.  All of our existing freedoms as outlined in the original US Constitution and Bill of Rights are under severe assault today, however, worse than I can ever recall over my entire life.  And while the political left has always raised fearful specters of "violent right-wing Christian" factions fomenting some new apocalypse, coup-d'etat and American dictatorship, the ugly truth is, the current push to restrict and end American freedoms comes from those same left-wing ideologues, hard-Marxists cloaking as "merely liberal, innocent little sheeps, baaa, baaa, baaa", pushing seriously totalitarian agendas under the banner of "Political Correctness".  Even the tragic case of Wilhelm Reich validates this view, as well-documented in two books, In Defense of Wilhelm Reich by myself, and Wilhelm Reich and the Cold War by James Martin.  It was the hard-left Marxists and Stalinists of his day, the early carriers of the PC virus, who along with the Nazis tried to murder Reich in Europe, and also the same Marxist-Stalinist Left that finally succeeded in finishing the job in the USA, also engineering to get his books burned.
http://www.orgonelab.org/cart/xdemeo.htm#IDOWR
http://www.orgonelab.org/cart/xorgone.htm#WRCW
The PC demand is, everyone must conform to consensus ideology dictatorships that erases the rights of individuals to think, write, speak out against, or act upon on issues which the PC dictators find "offensive".  Draw a Muhammed cartoon, question the wisdom of Bruce Jenner, "deny" the CO2 theory, question "genderism" or open-borders suicide, watch re-runs of Dukes of Hazzard, or document how Reich was murdered by the political Left, and ohmygod, you are one evil SOB, deserving to be censored, slandered, beaten up, thrown out or even beheaded.
In that context, remembering what July 4th is all about is refreshing and liberating.  One does not need to be religious or an uber-patriot.  One can even be a liberal (even if most liberals, by endorsing hard Leftism, have forgotten their roots in opposition to tyranny).  July 4th marks our heritage and rights to be as self-regulated as is possible, to object to all those who want to rob from us the rights to our own life-path and ideas, and our rights to free associations with others who share our ideas, and to voice those ideas publicly, even brazenly.  Equally important, July 4th marks our obligations "to ourselves and our posterity" to stand up in defense of freedom, beyond merely words if necessary, as the minions of political fascism, and especially today Islamic fascism, have no intentions of stopping merely at throwing bad words in our direction.  Freedom and responsibility go hand in hand.  America was never so stiff as the patriarchal authoritarian Empires of old Europe, which Reich wrote about, and his changing views after departing to the USA expressed that change of heart. US government officials and military men all swear allegiances to the US Constitution, not to the President, nor to any political party -- even though it is clear enough, some of them wish that could be changed.  Liberty thereby carries a price, a responsibility to keep aware of that danger, and to oppose efforts to erode or destroy our freedoms domestically as much as to oppose the same from any foreign tyrant. Freedom is a right, not beneficently "granted" to us by any King or body of law, but as safeguarded within the American spirit, and our Republic, we have a tremendous gift from prior generations. A gift "if you can keep it", as Ben Franklin famously put it.  Can we keep it?
While never planned as such, July 4th came to identify the healthy impulse of Americans to stand up to the authoritarian agendas of tyrants world-wide, and especially petty tyrants in our own government institutions, who thankfully still can be voted out of office every 2 or 4 years, if we are smart enough to do so.  July 4th also marked an historical sentiment that spontaneously spread around the world, to be taken up by peoples of nearly all races, creeds and nationalities in their own struggles against Kings, Emperors, Commissars, petty dictators and tyrants.
Keep that healthy rebellious sentiment alive!
Happy Independence Day, 4th of July!
James DeMeo
Comments welcomed only on the Wordpress page, real name required.
https://obrlnews.wordpress.com/2015/07/04/happy-independence-day-4-july-1776-to-2015/
+++++
"In a time of universal deceit, telling the truth is a revolutionary act."
- George Orwell
Weekend Seminar on:
Wilhelm Reich's Original Orgonomic Discoveries:
Foundations and Science
Emphasizing New Research Supporting Reich
http://www.orgonelab.org/events.htm