Although Dr. Lin raises some criticisms of the NTP study in this and an earlier paper (1, 2), he recognizes the importance of this research to the field and the implications of the study findings for public health (2).

He praised the FDA and the NTP for the initiation and conduct of the study and emphasized the need for the "U.S. government to step in and conduct such research programs and not leave the matter entirely to the cell-phone industry" due to his concern that "The wireless industry has had nearly free reign to develop and distribute cellular mobile phones and related RF devices as they see fit."

Dr. Lin was one of fourteen experts convened by the National Institute of Environmental Health Sciences to review the National Toxicology Program's cell phone radiation study in March of this year. He is a professor of electrical engineering, bioengineering, physiology, and biophysics at the University of Illinois, Chicago. His https://www.ece.uic.edu/~lin/publications.pdf publications include ten books, hundreds of papers and book chapters, and he has made hundreds of presentations at professional conferences. He has served on the editorial board of fifteen professional journals and has received numerous https://www.ece.uic.edu/~lin/ awards and honors throughout his distinguished career.

Key passages from Dr. Lin's new paper and references to both papers along with a summary of the NTP study can be found at:

https://www.saferemr.com/2015/05/brain-tumor-rates-are-rising-in-us-role.html
Brain Tumor Rates Are Rising in the US: Role of Cell Phone & Cordless Phone Use

https://www.saferemr.com/2015/11/effects-of-cell-phone-use-on-adolescents.html
Effects of Cell Phone Use on Adolescents

Our Year-End Summary and Request for Your Support.
https://obrlnews.wordpress.com/2017/12/03/please-support-orgonomic-science-research-at-the-demeo-laboratory-orgone-biophysical-research-lab-obrl/

Four days before the outbreak of World War II, Dr. Wilhelm Reich, a prominent Austrian psychiatrist and an outspoken anti-Nazi, arrived in New York to teach at the New School for Social Research. Yet, despite his university position, and his renown, four U.S. government agencies moved to censor Reich's work. His books and research journals were banned by a Federal Court order in the 1950's. Integrating primary materials, scholarly interviews, and eye-witness accounts, Love, Work, and Knowledge: The Life and Trials of Wilhelm Reich, presents a narrative of Reich's life and work, to explore the events that led up to this heinous example of censorship in America. 2018; 100 min.

TICKETS:
Tickets are available on a "first-come-first-served" basis and can be purchased at the door beginning a half-hour before the start time. Advance Tickets are available and can be purchased using Paypal up to the day before a screening (unless that screening is sold out). Log on to www.paypal.com, and use njmac@aol.com as the send money address. Tickets are $14 each in advance ($12+$2 processing fee). Include the names of the attendees and the date/time of the screening in the memo box. We will have a list of those who pre-paid at the door. Advance Tickets are non-refundable. Call or email us for more info on Advance Ticket sales. 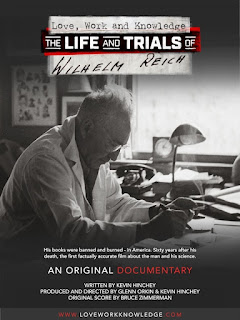 Four weeks from today, the California premiere of "LOVE, WORK AND KNOWLEDGE - THE LIFE AND TRIALS OF WILHELM REICH" will take place at the historic Del Mar Theater in Santa Cruz (September 4th & 5th at 6:00 p.m.).
The Del Mar is a restored and renowned cinema that is now part of the Landmark Theater chain which currently operates 52 theaters, with a total of 252 screens, in 27 markets. A good turn-out for these screenings in Santa Cruz could pave the way for future screenings of this film at other Landmark theaters in other towns and cities.
Which means that more people will have an opportunity to see this film the way it was meant to be seen:  ON THE BIG SCREEN where all of its visual, audio and musical components can be fully experienced and appreciated.
So come to the Del Mar in Santa Cruz if you can, on September 4th or 5th!   And if you can't be there, please help us spread the word to family, friends and organizations on the West Coast.
More details will be forthcoming in the next few weeks.
I realize that Santa Cruz isn't a convenient venue for all of you, but hopefully some of you will be able to attend.   And I hope that you'll please spread the word to anyone you think would be interested in seeing this film.   Thank you.
Warm regards,
Kevin Hinchey
South Glastonbury, CT.