Defending Wilhelm Reich's Work on Genitality, and the Rights of Heterosexual Youth

Defending Wilhelm Reich's Work on Genitality,
and the Rights of Heterosexual Youth
In the context of private discussions on-going among orgonomic professionals who accept the factual nature of Dr. Wilhelm Reich's concepts on genitality and sex-economy, I would like to introduce the excellent work of Dr. Stuart Brody, Professor of Psychology currently at the University of West Scotland, and his various associates.  For years, they have been pioneering a line of investigation similar to Reich's, thereby providing a substantial support for Reich's original findings.
Brody's (et al) research provides a powerful confirmation of Reich's original clinical findings and uncompromised views on the superior psychic and somatic health benefits of heterosexual genitality ("Penile Vaginal Intercourse" or "PVI" as Brody calls it), as compared to all other forms of sexual discharge (homosexuality, bi-sexuality, masturbation, oral-anal climaxes, whippings, group-sex, poly-sex, sex with prostitutes, rape, etc.).  This is of course a serious challenge to the Kinsey-oriented modern "sexual science" which is sustained mostly by powerful interest groups lobbying through governments for legal standing on a variety of sex-pathological fronts.  Brody's research also challenges some conventional views about "AIDS", that it is generally not transmissible by heterosexual genital intercourse, and also shows female vaginal orgasm is a higher indicator of woman's health than clitoral climaxes, just as with men the ejaculatory reaction does not constitute an "orgasm" per se, and when obtained by non-genital activity imparts only a shadow of the health benefits of PVI, or genital heterosexual intercourse.  For full details on this, read Reich's Function of the Orgasm.  It is still a light-year ahead of most of what's found in the modern textbooks.
Here is a list of what I feel are the most critical of Brody et al's research papers, with weblinks where the abstracts or full papers may be downloaded from internet.  A review of the titles alone is illustrative (organized chronologically, most recent first):
Brody, S., & Klapilova, K., Lucie Krej_ová (2013).  More Frequent Vaginal Orgasm Is Associated with Experiencing Greater Excitement from Deep Vaginal Stimulation
Journal of Sexual Medicine 2013;10:1730-1736
https://www.researchgate.net/publication/236191262

YouTube Videos On the Experimental Life Energy Meter, New Model LM4
The Experimental Life Energy Meter (LM) is a hand-held device with an analog meter dial, which displays an increasing reading the closer the instrument electrodes come to living matter, such as a human, or a tree or leafy bush.  It also responds to masses of steel or water, which are also known as substances which strongly attract the orgone energy.
Invented originally by Wilhelm Reich and called the Orgone Energy Field Meter, the newer Experimental LM was developed by Dave Marrett of Heliognosis, using solid state technology.  It became available for experimental use about 8 years ago.  Mr. Marrett subsequently developed the meter, through several iterations, towards greater sensitivity and utility, through versions LM-1, 2, and 3, the latter of which required a power-line source with electrical grounding for stability.  That version remained available for about two years.
The new model LM4 is now available, and it is even better.  It is fully portable, without the need for a wire connection to the power outlet, and runs on AA batteries.  There is one built-in "blue square" electrode on the meter itself, and a receptacle for a glass tube or large flat plate electrode.  The LM4 still has external jacks for output to a computer, and for alternative external electrodes.  It can be used for measuring people, pets, plants, objects, soils, fruit, liquids, etc.   With the data output port, one can hook the instrument to a computer using Labjack or Vernier software, or other DAQ programs, to produce an analog tracing of the strength of the human energy field, or the background atmospheric field intensity, along a time axis.  The newer LM4 version of the meter, the LM4, is also more stable than prior versions. 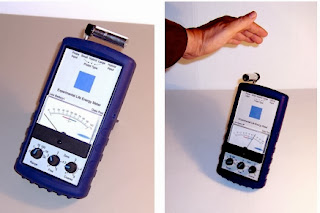 In controlled experiments, a dying leaf will show progressively lower readings over time.  A growing yeast culture will show increasing readings over time, radiating through the glass walls of a sealed vial in which the growth is occurring.  The LM4 will detect the human energy field from a hand at a distance, without direct contact to the electrodes.  On the most sensitive settings, the meter can detect a human energy field from one meter distance, or more, and unlike typical voltmeters, the analog dial readings remain constant with constant distance, and to not deteriorate after initial readings (as is the usual case with sensitive voltmeters).  It does not detect or react to electromagnetic, static magnetic or electrostatic fields, revealing a completely new parameter related to life.  Strong orgone blankets of multiple plys, for example, will give higher readings than those with fewer plys.  Experiments with liquids or plants show results which are intuitively confirming of life-energy parameters, though testing of liquids or fruits require precise laboratory controls over the mass of the materials being evaluated.  You cannot, for example obtain meaningful readings by comparing a large apple with a small one.
Several YouTube videos of the new meter in action are now available, including one in particular showing the increase in life-energy charge from a sealed glass vial of growing yeast.  In my view, this is a serious new experiment demonstrating the existence of the orgone energy or life-energy,  radiating from a closed system, outwards through the glass walls of the vial in which the yeast is growing.  You can view that video here:
Measuring the Increase in Life-Energy Within a Closed Vial of Growing Yeast.
http://www.youtube.com/watch?v=NBwyNdGKl_I
There's another giving basic instructions on operation:
Instructional YouTube Clip for the Life Energy Meter.
http://www.youtube.com/watch?v=duc7ylBObdY
The LEM4 is now available and in stock, ready to ship, from Natural Energy Works:
http://www.naturalenergyworks.net
See the upper part of the right-hand list.
While the LEM is the very best instrument for demonstrating the existence of human energy fields, and of the life-energy in the open atmosphere and surrounding both living and non-living objects and materials (similar to a "living cosmic ether") we still consider this to be an "Experimental" device, not suitable for clinical or health-diagnostic purposes.  Users are invited to review the various documents and reports at these webpages, run their own experiments and report back to us their observations.  There also are additional materials available:
1. Experiments With the Life Energy Meter:
http://www.orgonelab.org/cart/lemeter.htm
* Measuring the Life Energy Phenomena in an Impatience Plant Leaf
* Measuring Bio-Organic Versus Commercially-Grown Apples
* Preliminary Tests with the Experimental Life Energy Meter (at OBRL)
* Liquid Comparison using the Experimental Life Energy Meter (at Heliognosis)
In controlled experiments dying leaf will show progressively lower readings.
2. The Experimental Life Energy Meter:
History, Operational Procedures and Suggested Experiments
http://www.orgonelab.org/cart/LEMexperiments.pdf
Here is a general brochure on the Experimental Life-Energy Meter you can also download:
http://www.orgonelab.org/cart/LM4brochure.pdf
Happy Experimenting!
James DeMeo, PhD