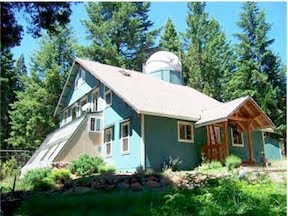 The OBRL Research and Educational Center
Several months have passed since the last informative newsletter was posted out.  This notice will update what's been going on at OBRL.
Firstly, for those newcomers unfamiliar with my research, which goes back to the early 1970s, a fundraising letter was sent around late last year, containing a section "Brief History of My Work" and another "Research at OBRL Today". Those provide more information and background, and can be reviewed here:
https://obrlnews.wordpress.com/2018/12/08/please-support-orgonomic-science-research-at-the-demeo-laboratory-orgone-biophysical-research-lab-obrl-2/
My published scientific articles, book previews and conference presentations are best found at the Academia.edu website, given the slow updating of our main website.
http://orgonelab.academia.edu/JamesDeMeoPhD
1. Two Lectures at the Energy Conference in Idaho. I'll be the keynote speaker, giving two lecture presentations, at the forthcoming Energy Science and Technology Conference, July 11-14, in Hayden Idaho (near Spokane).  Details are here:
http://energyscienceconference.com/
My lecture topics are:
* "Cosmic Ether Exists: Correcting a Major Error in Modern Science", and
* "The Orgone Energy Accumulator: Experimental Confirmations and New Water-Structuring Evidence"
http://emediapress.com/2019/04/25/2019-estc-secret-guest-presenter-revealed/
The first talk is the subject of my new book, nearing completion, described below, while the second is related to my recent research paper in Water journal.
http://www.waterjournal.org/volume-10

2.  New Book Nearing Completion.  The preliminary title is "The Dynamic Ether of Cosmic Space: Correcting a Major Error in Modern Science".  It gives a non-mathematical logic-based overview of the historical ether-drift experiments, showing how many, including the famous Michelson-Morley, got positive results proving variable light speed depending upon cosmic direction. Their experiments were followed by a much more ambitious effort by Morley-Miller and later by Dayton Miller independently.  All got very positive results, of an ether wind blowing across the surface of the Earth at round 10 kilometers per second.  All that work was subjected to widespread misinterpretation and misrepresentation, or was ignored for various reasons, as I explain.
Ether-compatible theories such as an infinite universe filled with a light-affecting energetic medium, as per astronomers Hoyle and Arp, and also the cosmic life energy of Reich, with similar discovery by Piccardi, Brown and Burr, gave the ether discovery a powerful boost.  They were also subjected to avoidance and erasure, including personal attacks. This gave full room for the development of contrary ether-incompatible theories with far less evidence (and no unequivocal evidence), such as the Einstein metaphysics, the big bang theory, and quantum entanglement. With the cosmic ether discarded, along with life-energy, the new metaphysical universe theories gained in power and false prestige, ruling academic departments, often with an iron fist. The post-Ether astrophysics pulled away from empirical astronomy, away from functional evidence-based science into a new unseen world of mystical objects and contortions in the fabric of space, which could only be approached as a belief-system. The universe was thereafter inhabited by  impossibly large quasars, mythical "black holes" (sorry, big problems with the so-called "first photo of a black hole"), "multiple universes", and a universal creation-myth worthy of any religion, of a big-bang explosion where virtually "everything was created out of nothing".  The older view of an infinite cosmos filled with a ubiquitous ether as medium for light waves, with the slow building up of matter and energy in stellar systems, with gradual declines over eons of time, was replaced by "empty space" and a dead universe. 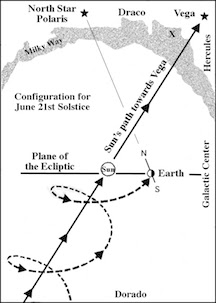 Diagram of the actual motions of Earth through space
Such a late-19th and early 20th Century cosmic ether is also agreeable in many aspects with Wilhelm Reich's discovery of the orgone energy, also a cosmic energy filling all space.  Reich wrote about the cosmic ether in many of his articles and books, describing aspects of it that only today have better confirmation.  My forthcoming book includes an in-depth chapter on Reich's ideas, updated to modern observations and claims.  Some of my own discovery on cosmic ether-motions are included.  This book is the product of a life-long interest, from my adolescence as amateur astronomer and astronaut wannabe, with a major focus over the last decade. The book will be around 350 pages, with numerous illustrations, a scientific work which does for physics and astronomy what my Saharasia research and book did for anthropology and history, revealing previously hidden patterns unseen or ignored by the specialists. The ether changes everything.  So does the life-energy.  The two concepts, supported by a lot of experimental evidence, constitute a powerful mixture pregnant with new approaches to old problems, and offers to sweep away much of the current stagnation in the sciences as a whole.
"The Dynamic Ether of Cosmic Space" is written for both the layperson and scientist, with minimal maths and lots of diagrams and figures one will not find elsewhere.  Further announcements will follow as the book becomes available.
3. Experimental work continues at OBRL, my focus of the last years being the orgone-charged vacuum, the OR Motor question, and a parallel investigation of electrogravitation.  Several substantial new steps and accomplishments have been made in the last two years, though delayed for completion of the new book. 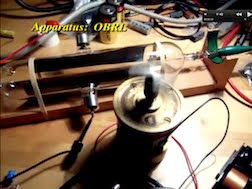 Testing of the KS-9154 Spinner Motor at OBRL
New experiments on orgone-charged water are also in the planning, following upon what was recently published in my peer-reviewed paper in Water journal, which summarized new spectrographic findings made at OBRL since c.2010.  http://www.waterjournal.org/volume-10