Islamic Ice-Age versus the US Constitution - Part 1 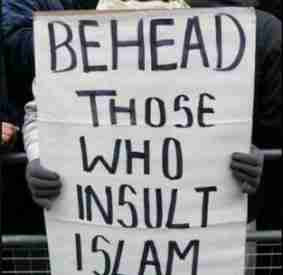 The Islamic Ice-Age versus the US Constitution and Western Freedoms - PART 1 of 2
by James DeMeo, PhD
28 September 2012
My findings on Saharasia proved in exacting scientific detail, through cross-cultural analysis of over 1100 different world cultures, how Islam in its political and ideological-religious contexts, is the most violent culture-type on the planet.  Social variables on child abuse, human sexuality, women's status and levels of social hierarchy and violence reflected in ethnographic data on individual cultural or tribal units, centered on the period c.1900 AD, proved this out exactly, and blend comfortably with modern data as gathered by the UN, WHO and other international agencies for the nation-states.  Exposure of the facts on these global patterns in human behavior were presented to the world firstly in my Saharasia publications starting in 1986, well before the events of 911, which factually validated my findings, and demarcated the onset of a global jihad war of organized Islam against secular Western democracy and social-sexual freedoms.  This war was not "declared" nor carried forward in the way Western thinking anticipates.  No formal declarations were made, and there were no marching armies with waving flags, etc., but it is an open war of conquest, nonetheless.
Islam makes open war against social and sexual freedoms wherever it exists, in ways far more harsh and extreme than seen elsewhere in any other cultures or nations.  Massive immigration and demographic expansion are key elements, which formalize into more overt violence when critical masses are reached.  But the hard facts on this are still being denied, with catastrophic consequences as Western leaders continue to nourish the comforting lie that there is some "moderate Islam" or "a difference between Islam and Islam-ism", even when Islamic leaders and religious authorities chronically openly state that no such differences exist.  "Islam is Islam", and the word itself means "submission".  There is certainly a small percentage of Muslims who reject the more violent aspects of Islam and want the greater freedoms as found in the non-Muslim world, but unfortunately they are marginalized and have no sway over their fellows, and frequently are at grave risk in their homelands to openly express such views.
Below I will address some specific issues which are cherished by nearly everyone in the secular Western world, even by a few Muslims or ex-Muslims (or soon to be ex-Muslims) or at least, what should be cherished, but regrettably is under severe erosion world-wide.
Argument:  The so-called "Arab Spring" has long ago degenerated into an "Islamic Winter" and now heads towards an Islamic Ice-Age.  This has been brought about by long-term planning and scheming predominantly by the Muslim Brotherhood, with help from nations which are ruled by the Communist Party (or its old remnants, in Putin's KGB Russia), as well as by left-leaning Western political leaders and hard-left political organizations and activists.  These latter groups see Muslim immigrant populations as natural allies within the context of their respective "collectivist" ideologies - the Ummah or Caliphate for Muslims, the communist society for leftists - as well as for "street muscle" in future clashes with police.  The political alliances forming over the last decade indicate a very open cooperation between left-political groups and Muslim groups, in a total sell-out of human freedoms and especially the freedoms of women and sexual freedom generally.  In this, they are joined by the skin-head and neo-Nazi movement, which remains somewhat in the background but can be seen if one merely looks for the evidence.  Contradictions abound, for certain, just as they did between the followers of Hitler and of Stalin, but this did not stop them in formulating grand alliances for sharing world conquest, as in the Hitler-Stalin Pact. A new totalitarian Ummah-Caliphate, with increasingly unmasked aspirations for global domination is firming up, following the outlines of the old Ottoman design, bit by bit so as not to frighten Western populations, whose leaders either have their head in the sand, or actually support a transition from freedom to totalitarian theocratic fascism. In this effort, they are being supported and financed  - either due to blithering suicidal idiocy or outright cloaked alliances and scheming - by powerful liberal-left institutions and even by the current Presidential Administration.
To clarify the point, here's a Pop-Quiz:
* Keeping in mind the above Argument as context, who said the following:

If you don't know the answer, then clearly your favorite news media are feeding you filtered and pre-digested sugar-coated gruel, to keep you ignorant and compliant, and probably you aren't too concerned about it.  You should be.
This should be troubling to everyone as, given its source, it carries a message to the Islamic world that their terrorism and violence is OK and permissible, and a thinly veiled threat against those in the West who oppose Islamic fascism, by someone with immense power at his fingertips.  Here is the more exact meaning:

"The future must not (and will not, if I can help it) belong to those who (dare to) slander the (beloved) prophet of Islam"