Nice pic of a sunspot group...

Nice pic of a sunspot group... being chased by the Moon's shadow at the edge of the Solar disc, during the recent 21 August 2017 Solar Eclipse. At OBRL we had a 93% eclipse blackout, the sky dimmed but we did not see the full corona as was possible in the northern part of Oregon. This pic was made from the rooftop OBRL Observatory using our Meade 16" ACF Schmidt Cassegrain telescope with neutral density solar filter. Even without the full eclipse and corona, it was a sight to behold! 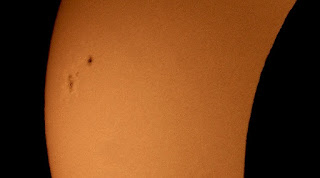 James DeMeo, Recent Seminar, and Download Interview with local Oregon Radio
Thanks to all who attended my Seminar at OBRL, near Ashland, Oregon. About 30 people attended from all over the USA and a few from Canada. This included Mr. Dave Marett of Heliognosis, the company which makes the Experimental Life Energy Meter, and who gave a short talk on the science behind that device -- originally invented by Wilhelm Reich, but greatly improved in the new solid-state version. Other guests included the local deer, who came by to investigate, poking their noses into the new outdoor-shelter lecture room.
The seminar topics will continue to be listed at our events webpage.  Our next scheduled seminar will take place two or three years henceforth.
http://www.orgonelab.org/events.htm
For those who could not attend, please consider purchase of my books, and those of Reich and others of similar topics, which can be found at Amazon (search "James DeMeo") and also from our on-line bookstore directly:
http://www.naturalenergyworks.net
Also below is the web addresses for a podcast interview I had most recently with a local radio station.  It was on the subject of my most recent book Marx Engels Lenin Trotsky: Genocide Quotes, The Hidden History of Communism's Founding Tyrants, in their Own Words.  I was also asked to give a final segment discussing my opposition to the current junk-science of "climate change", originally termed the "CO2 theory of global warming".  Big problems with that, and no, the science is not settled, no matter how many films Al Gore makes.
Cheers, J.D.
++++++
James DeMeo Interview with Bill Meyer on KMED, RE: New Book "Marx Engels Lenin Trotsky: Genocide Quotes. The Hidden History of Communism's Founding Tyrants, in their Own Words".
Download 08-09-17_WED_8AM 08-09-2017 (15.52 MB)
http://oregonedeals.com/podcast/index.php?p=episode&name=2017-08-09_08-09-17_wed_8am.mp3
Duration: 41:09 m - Filetype: mp3
To purchase this book:
https://www.amazon.com/Marx-Engels-Lenin-Trotsky-Communisms/dp/0997405708
Local author James DeMeo talks with Bill Meyer about his book detailing the bloodthirsty statements of socialist and commie founders, also we dig into the climate change issue, James is a climate scientist.

Road Closure and Detour affecting our Seminar
We recently were informed that the Oregon Department of Transportation is undertaking a major road repair and closure on the road which leads to our seminar location.  A detour route has been mapped out allowing for easy access.
An email on this was sent out to our seminar guests, but we are informed many did not get it. It will be sent again by email, but in the meanwhile if you are registered to attend, but did not get that notice, please contact OBRL as soon as possible to get the info.
J.D. for OBRL
Forthcoming Seminars and Lectures by James DeMeo, PhD
http://www.orgonelab.org/events.htm