Disturbing Book by Nikolai Levashov, with Analysis
Most people who are familiar with the good works of Dr. Wilhelm Reich, and orgonomy in general, will thankfully not know anything about the Russian psychic healer, Mr. Nikolai Levashov.  They can delightfully ignore this posting, if they so choose.
Others will have heard his name or know about the social movement he has created in Russia, and which today spreads into both Europe and the Americas.  This is being accomplished mainly through his solicitations into the natural health movement, via the route of "psychic healing", which already has its own large following.  Levashov will be known within those circles, either from personal experiences (good or bad) or other inside knowledge. But it is unlikely they will know the materials I am going to expose.
Levashov now has a new book, Russian History Viewed Through Distorted Mirrors. The alarming claims and racist hatred contained in this book were so disturbing that for several reasons I composed a Book Review and Social Analysis on the matter, which is now available as a PDF download.  The book reveals Levashov's descent into Russian Black Fascism, complete with "superior being, white-race" and other extreme mysticism, including Jewish scapegoating and Holocaust denial as core elements.

From Russia, With Hate: The Case of Nikolai Levashov

From Psychic Healer to Jew-Hate and Holocaust Denial

Levashov's words and writings, and the social movement he is forming, are a prime example of how the mechano-mystical split in character structure, based as it is upon bottled-up emotional turmoil and ungratified sexuality, is a slippery slope down into race-hatred and fascist thinking.  But then, everyone who reads and knows the works of Wilhelm Reich, as on the Mass Psychology of Fascism, or my own cross-cultural study Saharasia, which scientifically and precisely confirmed Reich on those issues, should already appreciate that point.
This is not for publication or web-posting, but many have encouraged it should be shared.
Thanks for your interest,
James DeMeo, PhD
Director of OBRL, Author of Saharasia.
Ashland, Oregon, USA
http://www.orgonelab.org
http://www.saharasia.org

These are interesting, suggesting bionous processes at great depth, giving rise to petroleum upwelling, much as there are "salt domes" pushed up from great depth, and not necessarily created from ancient ocean salts.

The Deep Hot Biosphere : The Myth of Fossil Fuels
http://www.amazon.com/The-Deep-Hot-Biosphere-Fossil/dp/0387952535

The Great Oil Conspiracy: How the U.S. Government Hid the Nazi Discovery of Abiotic Oil from the American People
http://www.amazon.com/The-Great-Oil-Conspiracy-Government/dp/1620871629

FGM in the UK. The Wonders of Multiculturalism.

The Wonders of Multiculturalism:
Islamization of the West
UK Medics Filmed Offering Gruesome FGM (Female Genital Mutilation) Procedure
Report Shows 100,000 UK Women May Be Victims
http://www.theblaze.com/stories/shocking-report-100000-uk-women-could-be-victims-of-fgm-and-zero-police-convictions/
Britain's Sunday Times is reporting that as many as 100,000 women in the UK may have undergone female genital mutilation (FGM) procedures- with some medics allegedly offering to carry out the brutal surgery on girls as young as 10.

Though the practice carries a jail sentence of up to 14 years in Britain, the paper reportedly filmed a family doctor, a respected dentist, and an alternative medicine practitioner willing to carry out the illegal practice, or arrange for it to be done, on various females in Britain.
+++++
100,000 women undergo brutal genital mutilation illegally in Britain (and some of the victims are as young as TEN)
* Police have failed to bring forward a single conviction
* Only two doctors have ever been struck off by the General Medical Council
* Victims often suffer in silence and sometimes battle to stand or walk
* One doctor offered to perform the procedure on a 10-year-old girl for £750
http://www.dailymail.co.uk/news/article-2133427/100-000-women-undergo-brutal-sexual-mutilation-illegally-Britain.html
The Islamization of the West continues.

Kill the Heretic Dissenters from the CO2 Religion
Climate Change Skepticism a Sickness That Must be "Treated," Says Professor
http://www.prisonplanet.com/climate-change-skepticism-a-sickness-that-must-be-treated-says-professor.html
Twisted Face, Twisted Mind
Professor Norgaard Urged Obama To Ignore Democracy, Public Opinion
http://www.prisonplanet.com/professor-norgaard-urged-obama-to-ignore-democracy-public-opinion.html
End Democracy Now!  What we need is a Fuhrer!
Climate Alarmist Calls For Burning Down Skeptics' Homes
http://www.infowars.com/climate-alarmist-calls-for-burning-down-skeptics-homes/
A Tennessee Fireman's Solution to Climate Change
http://www.forbes.com/sites/stevezwick/2012/04/19/a-tennessee-firemans-solution-to-climate-change/
Burn Them!
Such is the voice of the violent OWS Loony Left.
Can't win an argument on the basis of facts and merit?
Then slander and murder your opposition.

Rules are Rules. Do not let common sense stand in the way of a good disaster.

Rules are Rules.   Do not let common sense  stand in the way of a good disaster.
From:  Billibob
Subject: rules are rules.
Good news:
It was a normal day in Sharon Springs , Kansas , when a Union Pacific crew boarded a loaded coal train for the long trek to Michigan.
Bad news:
Just a few miles into the trip a wheel bearing became overheated and melted, letting a metal support drop down and grind on the rail, creating white hot molten metal droppings spewing down to the rail.
Good news:
A very alert crew noticed smoke about halfway back in the train, and immediately stopped the train in compliance with the rules
Bad news:
The train stopped with the hot wheel over a wooden bridge with creosote ties and trusses.
The crew tried to explain this to Union Pacific higher-ups but were instructed not to move the train!
They were informed that rules prohibited moving the train when a part was found to be defective! 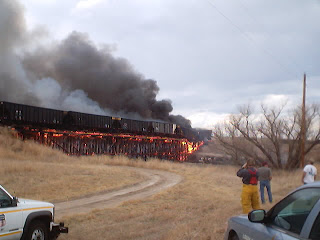 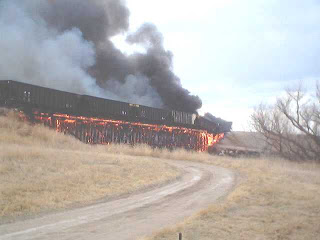 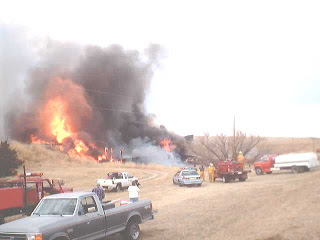 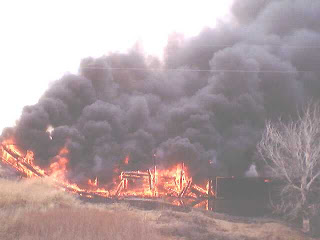 'REMEMBER, RULES IS RULES!'
(Don't ever let common sense get in the way of a good disaster! )
++++++++
From: James DeMeo
Sent: Thursday, April 19, 2012 2:08 PM
To: Billibob
Thanks Billibob,
I needed that semi-humorous relief.
But who got fired?  The train conductor or the higher-up?
Cheers,
James
++++++
From: Billibob
Smiles, the train conductor of course.
All is well with the Orgone Box seems to enhance all other treatments.

A recent collection of items.....
'It Is Clear the Science Is Not Settled': 49 Employees Call Out NASA for Unsubstantiated Climate Science
http://www.theblaze.com/stories/it-is-clear-the-science-is-not-settled-49-employees-call-out-nasa-for-unsubstantiated-climate-science/

Forecast: Interior Snow, Blustery Conditions for Northeast
http://www.accuweather.com/en/weather-news/interior-snow-blustery-conditi/63896
However, if you dare believe any of what's above, then you are insane.  Read this one, and be sure to take a look at the photo of the academic making this accusation.  Then go take your Prozac, or Ritalin, or whatever...
Climate Change Skepticism a Sickness That Must be "Treated," Says Professor
http://www.infowars.com/climate-change-skepticism-a-sickness-that-must-be-treated-says-professor/

I wish to thank the organizers and participants at my recent lecture and seminar at the Technical University of Munich.  The event went well, by all measures, and some interesting discussion took place during the question periods.  Below is a follow-up with added detail, on a few issues which either required some documentation sources, or for which time did not allow any full addressing.
J.D.
++++++
4 April 2012
TO:  Munich Lecture/Seminar Participants
FROM:   James DeMeo

RE:  Follow-Up Issues
During and after my recent lecture and one-day seminar in Munich, devoted to new research supporting the works of the late Dr. Wilhlem Reich, a number of questions came up and for which I promised specific individuals a reply once returning to the USA.  Since these same questions may be of interest to the entire group of participants, I will make them more publicly available here.
I also wish to re-emphasize a point made at the beginning of the lecture, that in such a short time it was impossible to go into much detail on any one given point of Reich's own research findings, or to give full details on the more recent experimental confirmations.  Here I will also point to additional resources on that issue.
1. A summary article on my Saharasia findings is available, in German and English (plus other languages) for free download from this webpage:  http://www.saharasia.org
The summary article provides basic details on the procedures out of which the World Behavior Map was developed.  Even more exacting details are found in the larger 460+ page book, entitled Saharasia, now available also from Amazon.de and Amazon.co.uk, which saves considerably on shipping costs to European destinations.
2. Regarding Reich's orgone biophysical discoveries, my institute now has two interesting YouTube videos that should be of interest, along with a third one detailing some aspects of the work of the late Dr. John Ott, on low-level electromagnetic pollution, and the importance of full natural solar spectrum light.  See here:   http://www.youtube.com/user/naturalenergyworks
These are condensed for the general public, but cover many of the scientific issues with interesting graphics.
3. My various published scientific articles as appearing in both peer-reviewed research journals and more popular forums are listed here:  http://www.orgonelab.org/demeopubs.htm
Especially I would recommend the article recently published in Water Journal:

"Water as a Resonant Medium for Unusual Environmental Factors"

4.  Some of my most recent work, as regarding orgone accumulator influences upon water spectroscopy and/or GM counter rates, has only minimal publication.  However, preliminary reports are found in back issues of the Newsletter of my institute, the Orgone Biophysical Research Lab (OBRL), available for free download from here:

I also recently learned of a doctoral dissertation from the University of Vienna, where just such a replication had been made.  Here is the citation and a download weblink:

Both of these studies provide positive evidence in favor of Reich's original findings.
7.  At the end of the seminar the subject of "chemtrails" came up.  I would recommend to review the various entries at this website for a good overview of the subject from a mainstream science perspective:  http://www.contrailscience.com
Given how Reich's name and the subject of the cloudbuster has been dragged into the "chemtrail" claims, I have posted my own review of the situation, which adds an orgonomic perspective, as well as one drawn from classical weather science.  Here: http://www.orgonelab.org/chemtrails.htm
8. Finally, I was asked by several persons for suggestions on internet news sources which would allow for timely reports on Islamic violence around the world, about the modern alliances between the political Left-fascists and Islam-fascists, and also for more honest reporting than is available from most European left-politic news sources.  Here is a short list of recommendations, to gain an appreciation for what you are very likely not being told (WARNING: These are not for the "politically corrected", weak-minded or lotus-eaters):

Also this list of YouTube presentations on the lesser-known history of the Islamic Crusades:
http://www.youtube.com/playlist?list=PL7398C647F839FF21&feature=plcp
Each of these web sources also has their own email notification list, giving only the headlines after which you can bring up whatever is of interest.  They are highly recommended.  Unfortunately I do not know of any comparable ones in the German language, but would welcome suggestions along those lines.
That's all, and thanks once again for your interest in my work, and participation at the lecture and seminar.  Be sure to get on the OBRL Newsletter email list, for future notifications of lectures, seminars, conferences, and new publications on the subject of Wilhelm Reich and Orgonomy.
James DeMeo, PhD
Director, Orgone Biophysical Research Lab
Ashland, Oregon, USA
http://www.orgonelab.org
http://www.saharasia.org
PS.  For those in a position to do so, please consider making a donation to our institute and research.  Contact me for details on how best to do this:  demeo (at) mind (dot) net