When John Allen Muhammed and Lee Malvo were cruising the Washington-Baltimore area and randomly murdering people with a high-powered sniper rifle from the concealed space of their vehicle, the mainstream media rarely made the Muslim-Islam connection, to suggest that even though it was just after 9-11, that the pair was motivated by Jihad ideology. But in fact, this does appear to be the case, as revealed today in numerous blogs and a few conservative newspapers which are following the trial with accuracy. I report on this purely because so much mainstream lying is going on, lies of omission, ignoring the Muslim-ideology aspect and the black-victimhood ideology of these crimes, which indeed struck terror into people living in those regions. 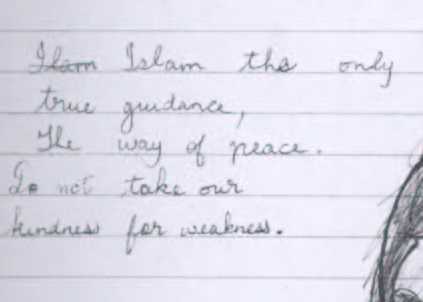 Malvo's jail-house drawings are filled with cartoon images of Jihad, statements about Islam, Jihad, Allah and such, and of course the fact that the elder Muhammed changed his name to the Muslim form after a conversion some years earlier while under the influence of the hate-filled fanatics of the Nation of Islam, a black-racial-supremist group prone to exceptional violence.

Given even less discussion, however, is the question if this was a pedophile pair, the older man and his young "lover", which also is one part of the "hidden face of Islam" given the widespread fear and hatred of female sexuality, which saturates Islamic societies.

Michelle Malkin's blog has gathered some of the best information on these issues, including copies of the jail-house drawings:
http://michellemalkin.com/archives/005257.htm

Once again, why don't these drawings show up on the pages of the mainstream newspapers or TV news reports? Where is the mainstream discussion on the Islamic-Jihad aspect of their crimes? Maybe I simply have missed them, but it does appear, such an open discussion does not exist, so far as I can tell. The message from them is: American Sheep! Go back to Sleep! Not to Worry! Islam is a peaceful religion!

The same mainstream media misinformation and lying by omission also occurred in numerous other terror incidents in the USA just after 9-11, such as with the Muslim who opened fire with a handgun at the El-Al (Israel) Airline desk at Los Angeles International Airport, killing numerous strangers. And that's only one example. He was dismissed as merely being "deranged" -- but what fanatical adherent to the hate-filled doctrine of Islam is NOT "deranged"?? The fact that all the suicide-homicide killers were Muslims, that so many other mass-murder plans and schemes by numerous Muslims worldwide have been thwarted, is an aspect which only the ordinary man-in-the-street seems to notice. Every society has its violence, but if a group of mass-murderers in a prison somewhere organized a new "jail-house religion", which advocated killing or enslaving everyone who did not join their cult, we would have no hesitation to identify that as some kind of mass-insanity and criminal psychosis which necessitated keeping those people in prison. But the "jail-house" madness which grew in the core-deserts of Arabia 1400 years ago, and which also demands killing or enslaving of all non-believers, is somehow different?

"Just keep quiet and everything will be OK." (Muhammed Atta)