More Muhammed Cartoons - Hang On to your Hat

More Muhammed Cartoons - Hang On to your Hat

It seems Harpers Magazine is showing some spine. I continue to have mixed feelings about them. They published the original Brady smear articles attacking Wilhelm Reich, which helped to stimulate the eventual burning of Reich's books, and his death in prison, and they never made any public apology about it. They also published several other items, in recent years, making horrid ridicule of Reich's findings.

On the more positive side, they broke big medical taboos by publishing the Celia Farber article critical of AIDS orthodoxy, and will now expand its venue and take on the Muslim fanatics. I am informed the June issue Harpers will carry an article by New York cartoonist Art Spiegelman, apparently focused upon press self-censorship, and it will carry the original 12 Jylands-Posten Danish Muhammed cartoons which caused so many Mulsim heads to explode. 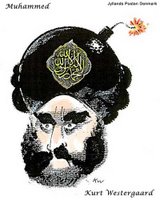 But it seems, firstly we will see lots of Infidel heads explode, as witnessed in Canada, where the largest bookstore chain "Indigo Books" has now refused to carry the June issue of Harpers. Probably they will continue to carry the Koran, however, which advocates murder, deception, invasion, theft, etc., but no cartoons!

Comments:
Unlike the outstanding HIV-fraud article by Celia Farber, the cartoon article in Harpers this month is written with "even-handedness" as a pretext: it is even-handed by partisan standards. And so vision fogged, I'm sad to say this time Harper's wimped out. Yes, they show and even give slide by slide commentary about each of the twelve Muhammad depictions (bravo), but the article that accompanies the images is written in the spirit of "poor offended Muslims" ("the already put-upon Danish Muslim community") and "bad Jylands-Posten" ("inviting cartoonists to throw pies in the face of Muhammad"); there are multiple references to "anti-immigrant" or "islamophobic biases" while, on the other hand, the author weighs in with his own mischief and irony: for example, by rating each cartoon with the "fatwa bomb meter". His acknowledgement of the resulting violence and death at the hands of Muslims is posed in terms that soften and diminish it, confessing bafflement at it all by suggesting that rather than the cartoons, Muslims should have been focused on the "truly horrifying torture photos" of Abu Ghraib! And so 1400 years of violent Islamic Jihad remains unmentioned, unacknowledged and unaccounted for – except by the bodies...